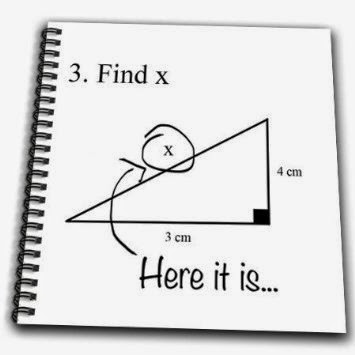 An statistics professor plans to travel to a conference by plane. When he passes the security check, they discover a bomb in his carry-on-baggage. Of course, he is hauled off immediately for interrogation.

"I don't understand it!" the interrogating officer exclaims. "You're an accomplished professional, a caring family man, a pillar of your parish - and now you want to destroy that all by blowing up an airplane!"

"Sorry", the professor interrupts him. "I had never intended to blow up the plane."

"So, for what reason else did you try to bring a bomb on board?!"

"Let me explain. Statistics shows that the probability of a bomb being on an airplane is 1/1000. That's quite high if you think about it - so high that I wouldn't have any peace of mind on a flight."

"And what does this have to do with you bringing a bomb on board of a plane?"

Four Friends: In Sickness And In Health

Four friends have been doing really well in their Calculus class: they have been getting top grades for their homework and on the midterm. So, when it's time for the final, they decide not to study on the weekend before, but to drive to another friend's birthday party in another city - even though the exam is scheduled for Monday morning. As it happens, they drink too much at the party, and on Monday morning, they are all hung over and oversleep. When they finally arrive on campus, the exam is already over.

They go to the professor's office and offer him an explanation: "We went to our friend's birthday party, and when we were driving back home very early on Monday morning, we suddenly had a flat tire. We had no spare one, and since we were driving on backroads, it took hours until we got help."

The professor nods sympathetically and says: "I see that it was not your fault. I will allow you to make up for the missed exam tomorrow morning."

When they arrive early on Tuesday morning, the students are put by the professor in a large lecture hall and are seated so far apart from each other that, even if they tried, they had no chance to cheat. The exam booklets are already in place, and confidently, the students start writing.

The first question - five points out of one hundred - is a simple exercise in differentiation, and all four finish it within ten minutes.

When the first of them has completed the problem, he turns over the page of the exam booklet and reads on the next one: