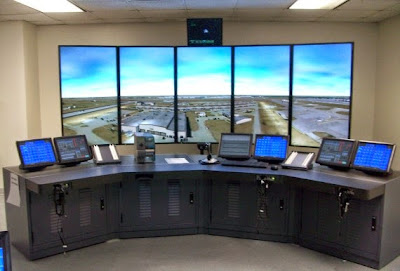 In order for you to become a licensed Air Traffic Controller (ATC), or Airways Communicator, in the Philippines, you'll have to: [see previous post]
1. Pass the Competitive/Qualifying Exam for Comprehensive Air Traffic Service (CATS) course,
2. Pass the Interview,
3. Pass the Medical/Physical Examination, and
4. Complete/pass the CATS course.

The vocation of being an Air Traffic Controller is highly technical, and not everyone's cup of tea, you'll have to continue and complete the training with great effort and heart in it to become one.

The Comprehensive Air Traffic Service (CATS) Course is a 10 months long training course and is the most difficult part of becoming an Air Traffic Controller. The course has three phases, namely: 1) Theoretical, 2) Laboratory, and 3) On-the-Job Training, which of course must be taken seriously. There are at least 17 subjects for phase 1 to be taken within 9 weeks, and which you must pass in order to proceed to the next phase of the course. In phase 2 there are three subjects which you must pass, the entire class will be divided into three groups and each group will rotate or be assigned to ATC facilities (tower, radar, acc). Only after completing the course that you can obtain your airman's license and be fully eligible for the Air Traffic Controller (ATMO) position.

There were different programs designed to produce controllers in previous years, prior to CATS course was the BATS (Basic Air Traffic Service). There were 13 batches of BATS then it became CATS. CATS was first implemented in 2008 and will end next year (2016). The CATS or Comprehensive Air Traffic Service course is the designed program offered for aspiring Air Traffic Controllers (or Airways Communicators) in the Philippines. The first competitive exam, for CATS, was administered on November 2008. There were 37 successful applicants who passed the qualifying exam for CATS 01. This year's batch/class (CATS 09) of trainees of CATS course, who are expected to graduate in January/February 2016, will be the last. There will be no more CATS 10.

The CATS course will be replaced by a new program - the officer candidate program (I don't know yet the official name). There is a joke about the name of the new program, before was the BATS, next is CATS, then the next would be DOGS! haha... Unfortunately, the name of the program is CAOCSP. CAOCSP for aspirant Air Traffic Controllers and ANS Personnel in the Philippines will be military/semi-military styled, and the trainees will be called cadets (or cadettes). From the previous 10 months long CATS course, the new program is designed for a duration of 12 months. This new program will be in a form of a scholarship and will be subsidized by the government, unlike the previous programs where the trainees are the ones to shoulder their living and other course-related expenses.

The cadets (cadettes) will receive the following benefits/privileges:

Note: The rules, which must always be observed within the CATC, including but not limited to other CAAP premises, may be patterned or may be similar from the strict rules of existing military academies in the Philippines, i.e., PMA, PNPA. Although the rules for the CATS course is also strict, but, expect a much tougher rules with regards to the new program.

The new program is expected to be implemented this year (2015). If you are an aspiring Air Traffic Controller, first, you'll have to take and pass the competitive exam for admission to the new training program, just like the old ones. The competitive exam will be administered by the Civil Aviation Authority of the Philippines likely within this year.