Since independence in 1898 and the ratification of the Philippine Constitution in the First Republic, there have been 16 presidents. Starting with General Emilio Aguinaldo all the way to current president Rodrigo Duterte, this article details each president's particular contributions and achievements while in office.

After 34 years of Insular Government under American rule, Philippine voters elected Manuel Luis Quezon first president of the Commonwealth of the Philippines. He is known as the “Father of National Language” (Ama ng Wikang Pambansa). He died of tuberculosis in Saranac Lake, New York.

José P. Laurel's presidency is controversial. He was officially the government's caretaker during the Japanese occupation of World War II. Criticized as a traitor by some, his indictment for treason was superseded later by an amnesty proclamation in 1948.

Sergio Osmeña was the second president of the Commonwealth. During his presidency, the Philippines joined the International Monetary Fund.

Ramon Magsaysay was born in Iba, Zambales. He was a military governor and an engineer. He died in an aircraft disaster while boarding the presidential plane.

A lawyer, poet, and teacher, Carlos P. Garcia also served as a guerilla leader during the Pacific War. Born in Bohol, Garcia serviced as vice president under Ramon Magsaysay and as secretary of Foreign Affairs for four years. He became president when Magsaysay died in 1957.

Born in Lubao, Pampanga, Diosdado Macapagal was a lawyer and professor. His daughter Gloria Macapagal Arroyo was the 14th, and second female, president of the Philippines.

Born in Sarrat, Ilocos Norte, Ferdinand Edralin Marcos was a lawyer and Senate President for three years. He was president for 21 years. He ruled under martial law and his dictatorship was known for its corruption and brutality. Marcos was removed from office after the People Power Revolution.

The first woman president of the Philippines and the first woman to become president of an Asian country, Corazon Aquino was born in Paniqui, Tarlac. She was a prominent figure in the People Power Revolution that brought down Ferdinand Marcos' dictatorship. Her husband, Benigno Aquino Jr., was a senator during the Marcos regime and its strongest critic. He was assassinated while Marcos was still in power.

Fidel V. Ramos was the chief-of-staff of the Armed Forces of the Philippines before he became president. He was also a civil engineer. As president, he restored economic growth and stability in the country, even during the Asian Financial Crisis in 1997. He is the first, and so far the only, non-Catholic president of the Philippines.

Known as Erap, Joseph Estrada was the first president who had been a famous film actor. His presidency was controversial. During his years in office economic growth was slow and he faced impeachment proceedings. He was ousted from the presidency in 2001. He was later convicted of stealing from the government but was pardoned. He ran unsuccessfully for president in 2010.

Gloria Macapagal Arroyo was the 14th, president of the Philippines (and the second female president). The Oakwood Mutiny occurred during her term. Arroyo oversaw road and infrastructure improvements and higher economic growth that presidents before her, but there was also controversy. The so-called "Hello Garci" controversy involved recordings that allegedly captured Arroyo ordering the rigging of the election that put her in office. In 2005 Arroyo faced impeachment proceedings related to the recordings but the impeachment failed. After she had left office Arroyo faced additional charges of election fraud and misuse of state funds.

Benigno Aquino III was sworn into office as the fifteenth President of the Philippines. He joined the House of Representatives and the Senate before his presidency. He is the first president who is a bachelor; he is unmarried and has no children. 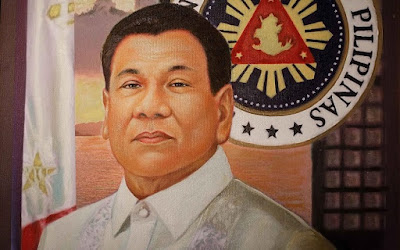 Rodrigo Duterte, former mayor of Davao, ascended to the presidency through a populist movement. His main campaign slogan was "change is coming" and vowed to fight/eradicate criminality and drugs within 3-6 months.